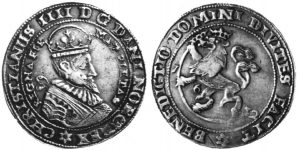 FAKE – These counterfeit and other pieces of rare european crowns and minors have been offered in Western-Europe, especially Germany, and are sold relatively cheaply by persons with good contacts to Eastern Europe. It is assumed that the originals are to be found in an important public collection in Eastern Europe. The counterfeit is struck, well made and very dangerous. The silver is markedly grey.