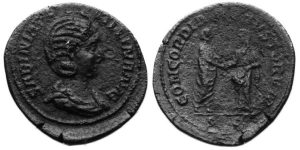 FAKE –  It has long been a suspicion that most knwon sestertii of Tranqullina, if not all, were made in the 19th century. See on page 14 of the BoC 19/1 for the illustration of two more specimens, all from the same dies. The weights that could be recorded are highly irregular.