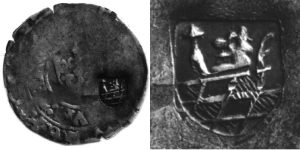 Counterstamp on groat from Prague.

FAKE – The rhombois on the false countermarks are partly hatched, on originals they are empty. The lion appears to carry an umbrella. On originals only two paws are shown, in most cases just rendered as hairlines. – These false counterstamps are coming from Eastern Europe.