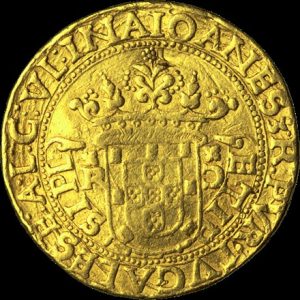 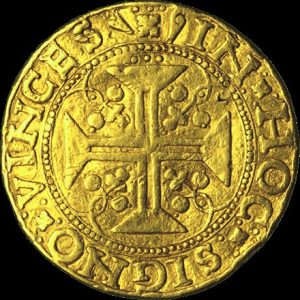 Portugues n.d. Porto Mint. Struck circa 1580-1590 in nothern Europe, probably in the same well known mints of Hamburg and Magdeburg. Friedberg 25.
Special mention is deserved to those German forgeries of the same era in which the popular gold Portugaloeser was minted in the name of German, Danes and Poles cities, principalities and duchies. The two main features of those German forgeries are, firstly, the word “PVRTVGALESE” engraved on the obverse legend (in German Portugaleser means Portuguese, a national identity, so the obverse legend, instead of -John the third king of Portugal- in Latin, reads -John the third king of Portuguese-, mixing Latin and German words). Besides that, the name of Portugal has been always written in Latin as PORTVGALIE (with POR, never with PVR). Secondly, the floriated reverse around the Cross of Christ is a feature never found on Portuguese coins of the period, but it was widely used on the gold Portugaloesers struck in Hamburg and in Magdeburg circa 1578-1580-1590.
I am sending attached a photo of one of the three identical German forgeries known to exist today in Portuguese and Brazilian collections. Please keep it in your archive. Once again, I wish to thank your important contribution to my study and for the photographs you kindly allowed me to use.