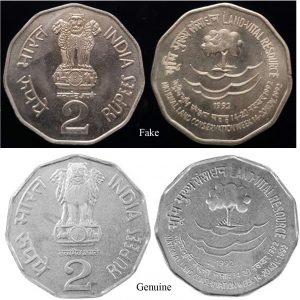 The National Resources Conservation Week was observed from 15th to 21st of November, 1992 as a part of an awareness campaign for conservation & promotion of Scientific Management of Land Resources. To commemorate this event a 2 rupee coin was struck by the Kolkata Mint. It is believed that these coins were not issued for public circulation. But the considerable wear on many known examples is evidence that a few pieces may have slipped into circulation. This is one of the rarest circulated coins in republic India coinage. Genuine examples fetch US$2000 in auction as of May 2016.

The fakes entered the market in 2016 are found all over eBay.