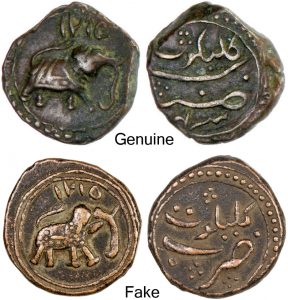 MYSORE: Tipu Sultan, 1782-1799, AE paisa (11.63g), Kalikut (كليكوت), AM1215, KM-75, elephant right, date in the order normally used only on the early Hijri dated issues.
These is one of several types of fakes of Mysore Tipo Sultan paisa coins that originated out of Bangalore India around 2000. The second kaf in the mint name is written as an alef. The shape of the elephant is totally wrong as well.