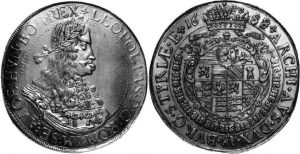 AV 10 ducats 1688. Graz mint.
Av.: Laureate and draped bust of Leopold to r.
Rv.: Crowned arms within the order of the Golden Fleece.

This piece appeared 1986 on the market.