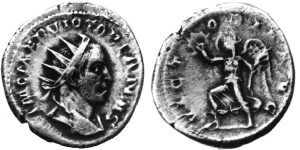 FAKE – In 1993 Roger Bland knew of 17 genuine antoniniani of this ephemeral ursurper and of almost as many published counterfeits. This above piece is an addition to Bland´s “Black Cabinet”.
On this counterfeit Iotapian closely resembles a younger, beardless emperor such as Philip Arabs or Trajan Decius. However, Iotapian was an old man with hollow cheeks and wearing a beard. Moreover, on the counterfeit he only wears the radiate crown, not the cuirass and the mantle, as he does on all the known specimens. The alleged findspot, Austria, is quite unlikely, it was in Syria that Iotapian rose against Philip I in 248.