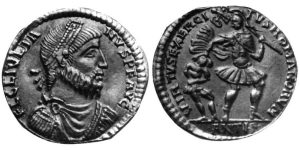 FAKE – This curious counterfeit differs in many details from the genuine solidi: The captive should wear his native dress and not just a loin-cloth, the soldier a short tunic and not a skirt resembling a dancer´s tutu.Both figures have the well-developped calves which point to Bulgaria as the country of origin.