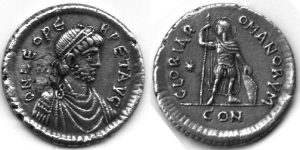 FAKE – This is clearly a bulgarian fake. These counterfeits coming out of Bulgaria in the early 1980s, such as the miliarensis of Valens published in BoC 9/1, 1984, p.10 or he false miliarensia of Honorius and Theodosius II such as published in BoC 10/1, 1985, p. 5-6.
After the pieces were codemned, they now appear with spots of artificial corrosion, which make them look much more convincing.