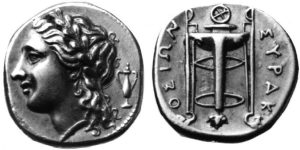 FAKE – Only two small gold coins are known from the short period of 365-363 B.C. when the Arcadians occupied Olympia and tried to refound the former state of the Pisatans. Their rarity must have inspired counterfeiters already in the late 19th century from when this counterfeit surely dates. This specimen was noted as false at the BM as early as 1933. A die-duplicate, allegedly found in an excavation, is in a German private collection which was formed around the turn of the century.