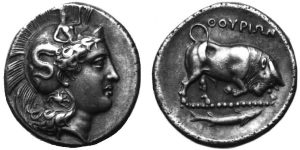 FAKE – The early distaters of Thurium have been much counterfeited. A large hoard discovered somewhere near Taranto in 1937 not only increased the existing number of these early coins by nearly 50%, it provided readily available models for a local artisan (supposedly named Festa) to create even more. F´s copies seemingly began circulating at roughly the same time as the real ones did. F did not only make casts, he also made his own dies. Characteristic of these fakes are a wavy reverse field and a considerable number of tiny edge cracks which are quite different from the type of cracks one expects to find on genuine pieces.

F did a particularly good job on this forgery, but using the enlargements of the Berlin coin in Kraay & Hirmer one can see the differents very clearly.