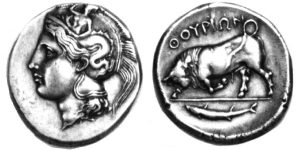 FAKE – The early distaters of Thurium have been much counterfeited. A large hoard discovered somewhere near Taranto in 1937 not only increased the existing number of these early coins by nearly 50%, it provided readily available models for a local artisan (supposedly named Festa) to create even more. F´s copies seemingly began circulating at roughly the same time as the real ones did. F did not only make casts, he also made his own dies. Characteristic of these fakes are a wavy reverse field and a considerable number of tiny edge cracks which are quite different from the type of cracks one expects to find on genuine pieces.

The reverse is much better done than the obverse. The lettering is misshapen, Scylla´s upper body and arms are too thin, Athena´s face, eyes, nose, ear, neck and hair are incorrect, Athena´s helmet and its crest also differ from the original.