December 6, 2018 – As soon as you set foot into the great hall of the New York International at the Waldorf-Astoria, you saw their familiar faces. Richard Margolis’s table was always by the windows cater-cornered to the entrance. His display cases always contained an impressive array of rare medals. I never saw Richard being on his own at his table. His wife Sara accompanied him to every coin convention. It was a great pleasure talking to them, especially because they were so very friendly. Any conversation I had with them enriched every visit of the New York International. And I never left their table without having learned something new.
Now, Richard Margolis is gone. He passed away after a long illness on November 24, 2018. 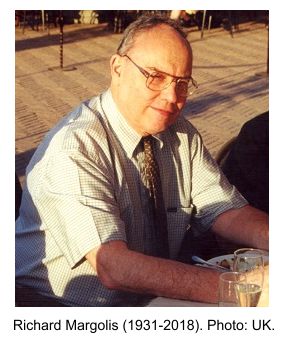 Richard Margolis was born in Manhattan on April 21, 1931. His father Benjamin was a dressmaker. His mother Norma, née Germain, was the daughter of a successful real estate developer working in the growing New York City at the beginning of the past century. Max Germain’s great coup was that he purchased properties at Route 4 before the George Washington Bridge was opened. He did not sell the real estate, but instead he let the properties – which is a company policy that his descendants have stuck with. Richard Margolis, too, was supposed to make a living as a real estate broker. After he had finished his studies at Tulane and New York University, he began working as the director of his grandfather’s company. He probably was not too happy about that.

After all, he had caught the bacillus numismaticus at the age of 12. Ever since his university days, he loved French coins and developed a great interest in the medal art of the 19th century. Hence, in 1958, he let realty be realty, and founded his own coin dealership. There was no getting around Richard Margolis if you collected French coins in the United States. For many years, he was the president of the Société Américaine de l’Étude Numismatique Française. In 1973, he published the standard reference work “The Silver Crowns of France 1641-1973”, which remains in wide use in the United States.
But he was also a competent person to contact for anyone who loves medals. The magnitude of his knowledge was manifested in an incredible work he published at Kolbe & Fanning in 2015. For decades, Richard Margolis had worked on a marginal field of numismatics: the terra cotta portraits of Benjamin Franklin, which Jean-Baptiste Nini made on behalf of Jacques-Donatien Le Ray. This owner of a pottery factory spread the portrait of Franklin in order to promote the goals of the United States, which was fighting the War of Independence at the time.
In this book, Richard Margolis illustrated what it was that he loved so much about numismatics: the countless possibilities of connecting history to concrete objects. Only a few people have mastered the art of observation as he had done. If he showed you a medal you ended up seeing things you had never noticed – and which you probably would not have noticed without his hints.

His decisive importance for the world of numismatics probably originates from a different decision, however. In cooperation with Fritz Weber and Bill Selfridge, he decided to establish a coin fair in New York, which was to be dedicated to ancient and foreign coins only. The fact that they forwent U.S. coins and medals was unprecedented in the United States at the time! The first New York International Numismatic Convention took place in 1972. It was a great success. Richard Margolis and his wife Sara were responsible for its organization for many years. They turned the fair into a haunt of international coin dealers and their U.S.-American colleagues. The fifth convention in 1976 – until 9/11 the fair was held at the beginning of the holiday season – already attracted 85 dealers from ten different countries. Nowadays, you cannot imagine a numismatic calendar without New York International.